As a leading service provider for architectural services it’s our constant endeavour to study and keep track of changing government policies for any new technology adoption. Building Information Modeling or BIM is one such technology which is been well received and adapted by not only the governance in the first world countries but also the followers in the line.

As per our esteemed clientele of Builders, Developers and Architects for outsourced architectural services in United Kingdom (UK) we understood that the formal adoption of BIM started somewhere around mid-2011 when Mr. Paul Morrell – UK Government’s Chief Construction Adviser initiated the adoption of BIM in UK’s government construction projects. As one of the key initiatives during the same period of mid-2011, the government of UK took a bold stand and announced its intention to collaborate all the asset information and data about all of its projects in 3D BIM format by 2016. A formal government body named The UK Government BIM Task Group was conceptualised and came in existence to lead the government’s BIM program.

With an objective to centralise the BIM Level 2 reference points for the industry, during mid 2016 UK Government announced a new central web portal; This was the time when the initially formed BIM Task Group got aligned under the guidelines of Centre for Digital Built Britain (CDBB), which was launched during 2018 and was followed by an announcement during late 2017.

Over and above government initiatives, our architectural services clients and leading industry players like Developers, Builders, Contractors and Architects came together to form UK BIM Alliance during the year 2016. The key objective of this alliance was to champion the technology and to ensure seamless enactment of BIM level 2 by 2020. The body formed also represents the industry players and the individuals determined to achieve goal of UK’s digital transformation of Built environment industry. 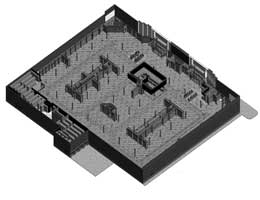