Essential principles for CAD Drafting in the Architectural services

In the architectural industry, Cad drafting standards plays most crucial role as they are considered as essential step for industries employing CAD professionals. Some believe that CAD standards are based on industries while others believe it is based on localized organization standards. The main role of CAD Standards is to set basic instructions for drafting and designing purpose during making of the cad drawings. At C-Design, cad standards help in achieving nil fault free environment and productivity and therefore it’s considered as a boon for architectural services. Those residential or commercial properties who don’t follow cad standards generally ends up doing rework which leads to loss of time and resources. Also many architectural projects take longer time for completion and also involvement of multiple designers at the different timelines. But in order to avoid any future confusion for working agendas or flawed drafts, CAD standards are considered as its ultimate solution.

The main areas where cad standards are defined are:-

Files Naming Standard-One of the biggest advantage of CAD Naming standards is to easily identify and maintain confidentiality of large drawings sets. As time factor plays a major role so drawing files which gets opened up mistakenly takes rendering time to open up which consumes time and energy factor

Plot standards-Architectural detailed drawing files become meaningful only if they get understood and shared with professionals or builders. Mostly Architectural plan set are commonly prevalent in print records but these standardized plot sets gets capable of producing prints with exact colours and line weights.

Below mentioned are the main advantages of using CAD drafting standards:-

Steady Drafting-Through cad drafting standards, formatting of line weights, dimensions, leaders, title blocks, text and drawings remain steady all over the project. This helps multiple designers to analyze and understand the pattern and figure out reason for any minute changes till the span of the project completion.

Easy to train any new drafters- Cad drafting standards manuals makes it quite easy to train new drafters and gives them brief understanding right from the starting till the completion of the project without creating any chaos.

Big time saver-Many times if multiple designers when work on single project follows same standards then navigation way becomes very easy during drafting and locating project files. Because if drafters don’t follow such standards then they works according to their own parameters and design which may leads to complete time and waste of energy included resources. 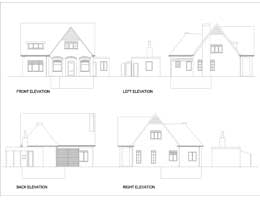